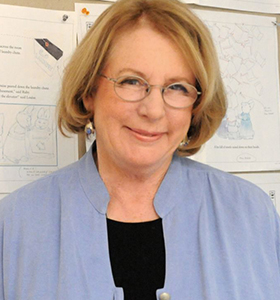 Rosemary Wells is an American writer and illustrator of children's books. She is well known for the Max & Ruby series, which follows the everyday adventures of sibling bunnies, curious three-year-old Max and bossy seven-year-old Ruby. Wells has also written Noisy Nora (1973), Yoko (1998), the Voyage to the Bunny Planet series, a Christmas book called Morris's Disappearing Bag (1975) and a collected book of illustrations of Rodgers and Hammerstein songs. She has also published Red Moon at Sharpsburg (2007), a historical novel featuring a young girl in the American Civil War. Otto Runs for President and Yoko Writes Her Name were published in 2008.